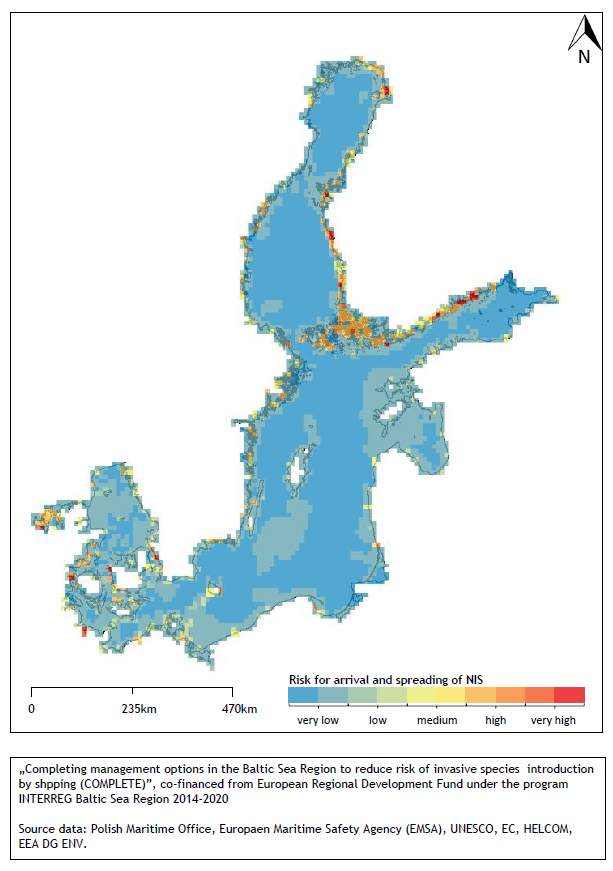 Due to increasing commercial shipping and boaters activity the risk of arrival of non-indigenous species (NIS) in the Baltic Sea also increases. Hull fouling is considered to be one of a main vectors of NIS introduction beyond their natural range. Thus nonindigenous species are observed first in port areas. However not only ports and marinas are vulnerable to invasions but also other places which offer favorable settlement surfaces for these species, ranging from quays and piers in ports to offshore hard surfaces of drilling units or wind farms. Sensitive areas, e.g. marine protective areas (MPAs), but also industrial seawater discharge sites or nuclear plant sites where water is warmer than nearby are prone to be invaded by NIS as well.

In the COMPLETE project University of Gdańsk analyzed and compiled information on the geographical location of ports, mariculture activities, areas offering favorable settlement surfaces, and easily invadable and sensitive areas. The location of these facilities as well as process of natural dispersal of species were considered and visualized on a heat map, were the risk of each as weighted to account for their relative importance. The map (figure and link below) allows to rank the risk for arrival and spread of NIS in the BSR from very low to very high. According to the map, hot spots representing areas with very high risk are located mainly on the coast of the Finland and Danish islands. Medium risk can be assigned to much of BSR countries coasts and islands. The lowest risk for arrival and spreading of NIS in BSR is observed at most of coastal areas of Estonia, Latvia, Lithuania and Kaliningrad.

Developed map gives an insight into natural conditions and diversity of human activities in specific geographic localizations what can be very useful in regard to biofouling management e.g. actions preventing disseminating of NIS to other BSRs or choice and maintenance of antifouling systems (AFS)