Currently in a beta-testing phase, HELCOM and OSPAR’s joint online tool for facilitating decisions on granting exemptions on ballast water management in their waters is soon getting a new interface as well as additional and improved features.

The tool was initially jointly developed by HELCOM and OSPAR to assist decision-making by their respective member countries on exemptions on ballast water management such as discharges in their waters. Since 2017, ballast water from ships is being strictly regulated by an IMO guideline, the Ballast Water Management Convention (BWMC).

“Ballast water from ships is potential vector of invasive species, pathogens of all sorts and other microscopic creepy-crawlies,” said Manual Sala-Pérez who oversees the update of the tool at HELCOM, adding that semi-enclosed and fragile ecosystems such as the Baltic Sea are especially vulnerable to pressures brought in from the outside.

But not all ballast water is created equal, and ship owners can apply for exemptions as provisioned in the Regulation A-4 of the BWMC, also known as A-4 exemptions. This regulation enables a country to grant exemptions on ballast water management for ships, provided the IMO standards on concentrations of organisms and pathogens in the ballast water are upheld.

Already in 2013, well ahead of the entry into force of the IMO regulations on ballast water, HELCOM and OSPAR se‌t up a joint harmonised procedure (JHP) on A-4 exemptions applicable to their member states. The JHP establishes a practical, jointly agreed upon regional framework and procedure for applicants of an exemption in the combined HELCOM and OSPAR marine area, ensuring a regional coherence on granting these exemptions.

As a part of this process, HELCOM and OSPAR had developped an online Decision Support Tool (DST) to explore the potential risk of shipping routes and to help the member countries with deciding on exemptions.

“With the help of the COMPLETE project, we are now updating the tool to make it even easier to grant exemptions on ballast water management in the Baltic and North seas,” said Sala-Pérez.

HELCOM, under the umbrella of the COMPLETE project, is leading the work on the improvement of the DST. The optimization of the tool is further based on guidance from the joint HELCOM and OSPAR TG Ballast group.

HELCOM work on the DST includes:

Information page of the tool.

For checking the potential risk on available routes, ports can be selected from drop-down menus.

The tool will show the flowchart for the risk analysis. 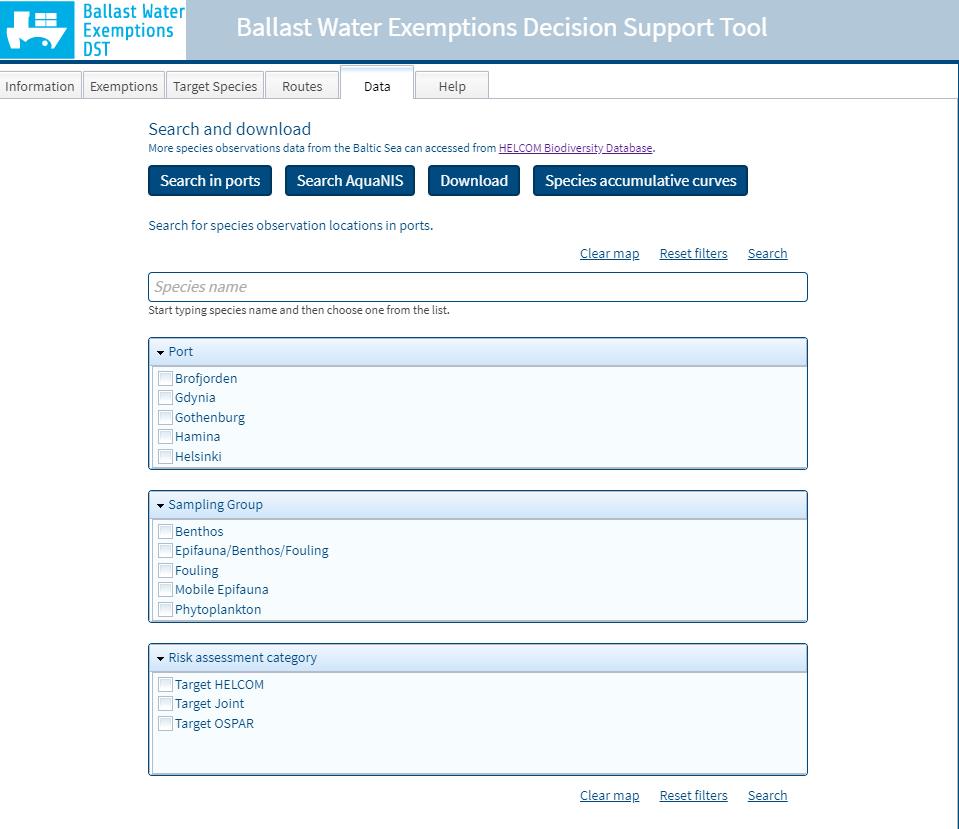 Information about species observations from the Baltic Sea can be searched and downloaded.