The biofouling assessment protocol developed in the COMPLETE project is currently being tested in four Polish marinas, namely in Krynica Morska, National Sailing Center in Gdańsk, Gdynia and Kołobrzeg, and in four Latvian marinas, i.e. in “MarinaAuda” in Riga, Pavilosta Marina and “Rojas Jahtklubs” in Roja and in Salacgriva Marina.

In May 2019, fouling plate sets were deployed horizontally in two subareas (inner and outer parts) of each of the above-mentioned marinas. The removal of the sets has already begun and will continue gradually in 6–7-week intervals till the beginning of October. In addition to the fouling plates, material was also scraped from vertical surfaces at each sampling site. The information on the fouling rate as well as on the non-indigenous species found in the marinas will be used to determine the potential risk of the introduction and spread of these species by recreational boats and trailers to the Baltic Sea Region.

In addition to the existing sampling plates made from PVC material, constructions consisting of other material types were also placed in the Latvian marinas. These experimental sampling plates are made of fiberglass material and covered with “self-polishing antifouling color”, imitating the material in the submersed parts of a yacht (three sampling plates at each marina). The first visual observations show that the plates coated with the special color overgrew more slowly than the sampling plates from PVC material. More substantial biofouling was observed in the port in the open part of the Baltic Sea (Pavilosta Marina), where the plates were more intensely overgrown with Amphibalanus improvisus, whereas the Gulf of Riga ports are dominated by species originating from freshwater environments, such as Dreissena polymorpha.

The information on the fouling rate as well as on the non-indigenous species found in the marinas will be used to determine the potential risk of the introduction and spread of these species by recreational boats and trailers to the Baltic Sea Region. 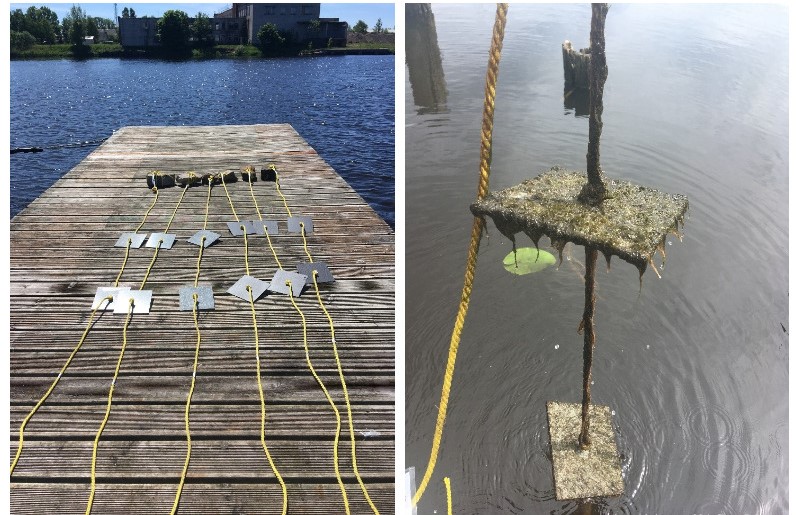 On the left, the fouling plate sets ready to be placed in the water, and on the right, the first sampling of fouling plates in “MarinaAuda” in Riga after first 6 weeks. Photos: Monta Kalniņa/LIAE.

Examples of fouling plates after 12 weeks at the National Sailing Center in Gdańsk (on the left), in Gdynia (in the middle), and in Kołobrzeg (on the right), showing different biofouling species. Photos: Radosław Brzana/UG.

Biofouling on a boat hull and attached to the engine. Photos: Bartosz Blum.